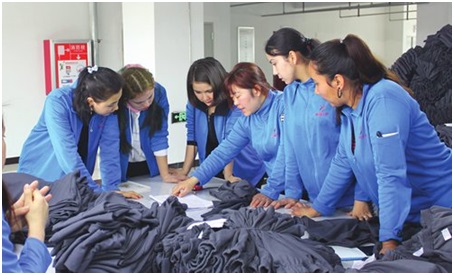 Global Times reporter Liu Xin recently paid a visit to Aksu Prefecture in Northwest China’s Xinjiang Uyghur Autonomous Region and talked to local residents. Many women shared impressive stories of starting their own businesses or working with their family members to get out of poverty. With the global community marking International Women’s Day on Friday, we published some of their stories to celebrate not only these beautiful and diligent women from Xinjiang and other regions in China, but also from the whole world.

Due to the lack of land, Gulikzi and her mother used to live in poverty and survived on subsidies from the local government. With the help of the local women’s association, Gulikzi applied to rent a shop built by the county government and took out a loan to buy equipment for the salon.

“After repaying the loans, the yearly rent of 2,000 yuan, the salary for another barber in my shop, I can earn more than 1,000 yuan a month. My family is no longer poor,” Gulikzi said with a smile on her face.

Gulikzi said that brides in the village come to her salon to get their hair and make-up done for their weddings. “The cost for a bride’s makeup and hair is between 300 yuan and 400 yuan. I’m very good at dyeing hair!” she said.

Ayixianguli Niyazi in Hailou town, Shaya county is 38 years old and a mother of two.

Her family used to live in poverty, since the only income was from her husband’s unstable job as a mason. She sometimes sewed clothes for people to make some extra money, but this was not enough for the life she wanted to give her children.

She began to work for a local clothes workshop in February 2018. The flexible working hours gave Ayixianguli the time to take care of her children before and after school and also brought her a monthly salary of over 1,000 yuan.

“Frugality used to be the key word for me in running the house, since every penny had to be used properly to save money. My husband and I also had arguments over money,” she said.

“But with the increase in the family’s earnings, I can buy more and better food for my children. There’s no more arguing about money in the house,” Ayixianguli remarked. “It’s really good for us women to earn money.”

Twenty-year-old Ayixiemu Younusi is thrilled about her upcoming trip to Beijing in March. Living in her hometown of Shaya county for almost all her life, the farthest place she had ever gone was downtown Aksu.

The clothing factory Ayixiemu works at has chosen her and one of her colleagues as representatives to go to Beijing. This free trip is a reward for their good work performances.

“I never thought I’d be so lucky! I want to see the flag-raising ceremony at Tian’anmen Square and visit the Palace Museum,” Ayixiemu said.

Talking about her future plans, Ayixiemu said that she wants to learn more skills from her colleagues in the factory to boost her salary.

Amanguli Wufuer works in a clothing factory in Shaya county with 30 other women from a nearby village. They are trying to complete an order to make 10,000 woolen coats worth 1 million yuan.

“The profits from this order could reach 200,000 yuan, and we’ll complete it within four months,” Amanguli said.

Amanguli owns a clothes shop and likes to design clothes herself. The local government in Shaya invited her to jointly run the clothes factory at the beginning of this year. She and three other women, who each specialize in designing, sewing and marketing, run the factory’s business.

“I used to see many women in villages cover their face and dress conservatively under the influence of extremism, although many of them told me that deep in their hearts, they love fashionable clothes,” Amanguli said.

But now women in Shaya are dressing however they like, following efforts in Northwest China’s Xinjiang Uyghur Autonomous Region to eradicate extremism.

“Whether they are from urban or rural areas, the women I’ve met are dressing fashionably. With less influence from extremism, more women are choosing to wear what they like. I’m so happy to see this.” Amanguli said. That’s why she is optimistic about the future of the factory.

Ajiranmu Aimaiti has a bakery workshop named after her in Tuowanke Maigaiti village in Wushi county in Aksu, which makes her very happy.

The village has offered different vocational skills for villagers who wanted to start their own business since 2017 and rented out training workshops at low prices to villagers with outstanding performances.

Driven by the desire to open a bakery by herself, Ajiranmu completed the training and now has 12 apprentices learning how to make various types of bread in the workshop.

“I can teach them how to bake as well as run my business. My income from selling cold noodles was about 1,500 yuan a month and now the earning of selling bread has increased to 5,000 yuan,” Ajiranmu said.

“I want to work hard to earn more money and offer a better education to my children,” she said.