“When I first went to Lhasa and saw trees there over 20 years ago, I wondered how nice it would be if there were also trees in my hometown,” said Samten Dargye, a 48-year-old herdsman from Nagqu  City  in northern Tibet. The man hadn’t been out of his hometown nor seen trees before he was 26 years old.
Nowadays, Nagqu  , with an average altitude exceeding 4,500 meters and more than 6 months of snow period and soil freezing period each year, ends its history as the only city without trees in China by continuously improving the survival rate of trees via technology.
“Today, we can see green trees in summer in Nagqu, though fewer than those in Lhasa. We had never seen trees in our childhood. But kids now can see,” Samten added. 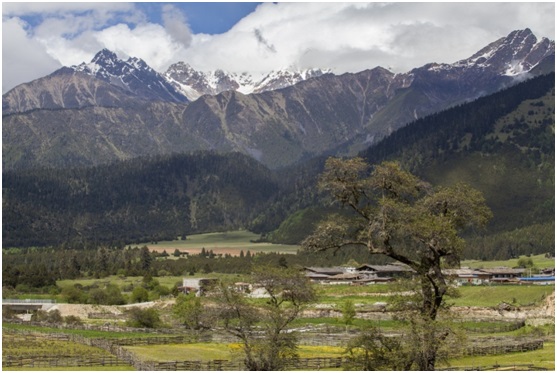 Lush landscape at a village in Tibet  CFP

Hailed as the “roof of the world” and the “third pole of the earth”, Tibet is not only the “source of rivers” and the “ecological source” for China, South Asia and Southeast Asia, but also the “starter” and “modifier” of the climate change of Asia and even the Northern Hemisphere as a whole. It plays an extremely vital role in ecology.
In recent years, Tibet has further advanced the afforestation campaign and implemented the project for afforestation in the basins of the Yarlung Tsangpo, Nujiang, Lhasa, Nyangchu, Yalong, and Shiquan rivers. Statistics show that 75,000 hectares of forests were planted in Tibet in 2018, with 863 villages ending the history of no trees. The forest coverage rate of the region rose to 12.14 percent in the same year.

West Zhejiang Road in downtown Nagqu is flanked by 612 trees along the 1,200-meter-long green belt, the first of its kind in the history of the city.
In November 2016, guided by the Ministry of Science and Technology and the Tibet Autonomous Region, Elion Group, a leading Chinesecompany specialized in land remediation and ecological rehabilitation, undertook the major science and technology project of planting trees in extremely cold areas of high altitude in Nagqu.
“After more than two years of hard work to address technological challenges, especially after the test of severe cold, strong wind and strong ultraviolet rays, the trial planting saw initial results,” said Hao Wei, the project leader of Elion Group.
To support the work, the Tibet Autonomous Region invested 10 million yuan ($1.493 million) to establish a pilot planting area of 113,300 square meters. Tibet’s forestry and grassland bureau allocated a special fund of 1.18 million yuan ($176,000) for protection of planted trees in winter in Nagqu.

Stretches of trees are also planted in Purang County, Gar County, Zanda County and other places with sandstones, poor soil quality, hypoxia at high altitude, drought and less rainfall in Tibet’s Ngari Prefecture. Eight villages in Zanda County ended the history of no trees in 2018. According to the forestry department of Ngari Prefecture, about 11 million trees have been planted in the prefecture, covering an area of 45,473 hectares of afforestation as well as prevention and control of desertification.
“We feel happier as the city turns green,” said Jamyang, a local official who has worked in the prefecture for more than 30 years.