By Peoples_Mail on March 6, 2020
By Qiu Haifeng, People’s Daily Overseas Edition
China’s efforts to minimize the impact of the novel coronavirus epidemic on the economy have paid off as the Chinese market still holds strong and continuous appeal to foreign investment amid the epidemic.
Shanghai’s Pudong New Area embraced a good start in attracting foreign investment this year.
It held a “contract signing on the cloud” event on Feb. 25, attracting a total of $1.7 billion with the signing of 21 projects.
The projects are funded by global industry leaders. Of the companies, European construction machine manufacturer Liebherr plans to build a regional headquarters in Pudong New Area. Siemens Healthineers, a leading medical equipment manufacturer, plans to open an innovation center for bioengineering research and development. U.S. oil company Exxon Mobil, one of the world’s largest oil companies, plans to launch a project in the automotive aftermarket segment.
The settling of the major projects in Shanghai reflected that foreign investors have remained optimistic about Chinese market.
In an effort to minimize the impact of the epidemic on foreign investment, Chinese government departments have formulated policies to address problems encountered by foreign-funded enterprises in investment, production, and operation, supporting these companies with targeted services and a combination of measures.
The Chinese market will remain attractive to foreign investment, analysts suggested, adding that the country is able to stabilize foreign investment as it is set to make progress in curbing the epidemic and implement policy measures to stabilize foreign investment.
At present, almost all major foreign-funded enterprises in Shanghai, east China’s Shandong province, and central China’s Hunan province have resumed work and production.
In Shanghai, the latest official survey showed that over 99 percent of the city’s 840 major foreign-funded companies had resumed work as of Feb. 25.
Shandong province is home to 32 South Korean-funded manufacturers of wires and cables, which occupy an important position in the global automobile supply chain. The province has taken efforts to help the enterprises resume production.
It issued an urgent notice, assigning specific persons to be responsible for delivering virus prevention and control information, as well as favorable policy measures on supporting enterprise development to the foreign-funded companies. The persons are also responsible for coordinating the communication between the foreign companies and relevant parties.
The factory of Yura Corporation, a South Korean company specializing in designing, developing, and manufacturing automotive electronics, has resumed production with the assistance of the government of Heze, a prefecture-level city in Shandong. Now, the factory is running at full capacity to produce wiring harnesses.
Affected by the epidemic, the factory was not able to provide sufficient products for its clients, and it received phone calls from them every day to inquire about the delivery of their orders, according to the manager of the company. “Thanks to the help of the local government who facilitated our efforts to resume work. Now we feel confident to pick up calls from clients,” said the manager.
By Feb.15, the 32 South Korean-funded auto parts manufacturing companies in Shandong had all resumed production.
While paying close attention to resumption of work in foreign-funded companies, China has also made great efforts to ensure constant progress in attracting foreign investment and projects.
Through online negotiation, video conference, and conclusion of agreements via online platforms, China has integrated various resources and managed to constantly push forward with work in promoting and attracting investment.
Recently, Shandong province held a contract signing event of 66 foreign investment projects simultaneously in its 16 cities through a video conference, with an estimated total investment reaching $14.39 billion.
Besides new projects, new companies have also been attracted to China.
Last month, a wholly-owned subsidiary of leading global asset management firm Oaktree Capital Management, was registered in Beijing.
The company decided to set up a subsidiary in Beijing because the city’s business and financial environment appeals strongly to foreign institutions, and that the company is optimistic about the long-term development of Chinese economy and the country’s capital market, according to an executive of Oaktree Capital Management.
Investment in China remains a popular choice of the majority of multinationals.
According to data from China’s Ministry of Commerce, during this January, a total of 3,485 foreign-invested companies were established in China. Meanwhile, China’s actual use of foreign capital reached 87.57 billion yuan (about $12.64 billion), up by 4 percent year on year, which basically maintained the steady growth momentum since the previous year.
China will continue expanding market access for foreign investors, increase the level of foreign capital utilization in telecommunications, medical services, education, culture, and finance, and further shorten the negative lists for foreign investment market access in pilot free trade zones and across the country, said Ren Hongbin, Assistant Minister of Commerce.
The country will strengthen the protection of the legitimate rights and interests of foreign investors, and improve foreign investment services, further improve the business environment, and earnestly implement the foreign investment law and the regulation on its implementation, according to Ren. 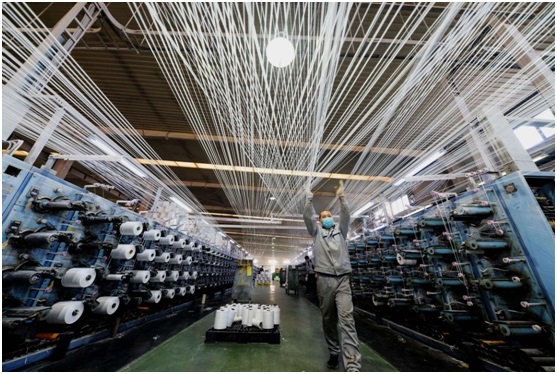 Employees of Qingdao Kwang Sung Plastic Co., Ltd., a South Korean-funded tarpaulin company in east China’s Shandong province are busy producing different types of tarpaulins to be exported to the U.S., Mar. 2. All employees of the company have returned to work. (Photo by Yu Fangping/People’s Daily Online

Make Hundreds of Dollars Daily From the Comfort of your Home