Late May is the best time of the year to explore the world’s “third pole” – Mount Qomolangma, as the wind on the summit is milder and the precipitation yet to come.

Sixty years ago, Chinese mountaineers successfully conquered the mountain from the south ridge for the first time in human history, and today, a Chinese expedition once again reached the peak of the mountain for measurement.

In the mountain working were also trash collectors.

On May 11, a ceremony was held at the Mount Qomolangma base camp to mark the commencement of trash collecting on the mountain this year.

It is reported that Mount Cho Oyu and Mount Shishapangma have been “cleaned up”, and the garbage collecting is also scheduled to end this month for Mount Qomolangma. As of mid-May, around 6 tons of garbage have been removed for the three mountains, all of which are over 8,000 meters high.

According to statistics released by Tibet Autonomous Region last year, a total of 3,019 people have reached the peak of Mount Qomolangma via its north ridge since 1960.

“Because it’s there.” The famous remarks by British mountaineer George Mallory attracted numerous to the foot of Mount Qomolangma, to whom a glance afar at the snow cap of the mountain would bring huge satisfaction.

As more and more people materialize their dream of conquering the world’s highest mountain, garbage is generated, bringing great pressure to local ecology. To clear trash on Mount Qomolangma, a place with extreme environment and unique geological conditions, is never an easy task, and the risks and difficulties expand as the altitude rises.

The cleaning of the north ridge was started in 1997 by Tibet Autonomous Region, and over 8 tons of trash were removed above the altitude of 5,200 meters in 2018 alone. The autonomous region also rolled out a temporary garbage management plan for the mountain, and established an environmental protection fund. It offers free trash cans and bags for climbers, and established environmentally friendly toilets at camps. Besides, the autonomous region also encourages local herdsmen and farmers to serve as full-time environmental workers. The base camp is also backed off to the Rongbuk Monastery at an altitude of around 5,000 meters.

Trash collecting for Mount Qomolangma is now regular and professional, and the control and environmental protection mechanisms are constantly improved. Though the mountain’s ecology is fragile, protection is gradually in place.

The grand and unusual sceneries are always in dangerous and remote areas. The trips reaching rarely visited places expanded human exploration of the world, and the human civilization must also be protected at unprecedented levels.

One day, to protect the mountains, seas, jungles and deserts will no longer be “exclusive” for explorers, but a common responsibility of every person on the Earth. As we move forward to test the physiological limits, we shall also never back down in safeguarding the limits of ecology. 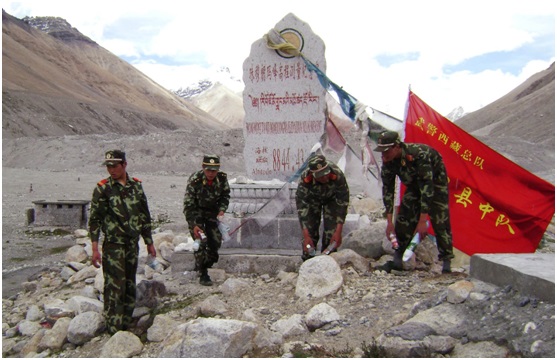